The inaugural year with just 1 group of 55 cars although only 52 started and 48 finished. The team Unknown Hillman Hunter was the star of the show (maximum number of breakdowns) and the marque of choice was the Lada with a dozen examples of this fine rear wheel drive steed taking part.

A small article in the Daily Telegraph was followed by a piece in The Independent and soon the crap car svengali Julian Nowill found he had started something that might run and run.

Filmed by Andy Pag, the run appeared endlessly on Men & Motors. The run appeared in magazines from Top Gear to lurid wank mags, the car section of course.  Many long term friends were made and Team Unknown started www.extremetrifle.com which continues to this day offering the maddest of mad capers. The term “banger rally” was coined and the 03 run has spawned hard money grabbing sites stealing our pictures and ideas to gently mocking low rent affairs such as the once only T4  where teams hit Timbuctu after 800 miles offroad in crap Volvos. 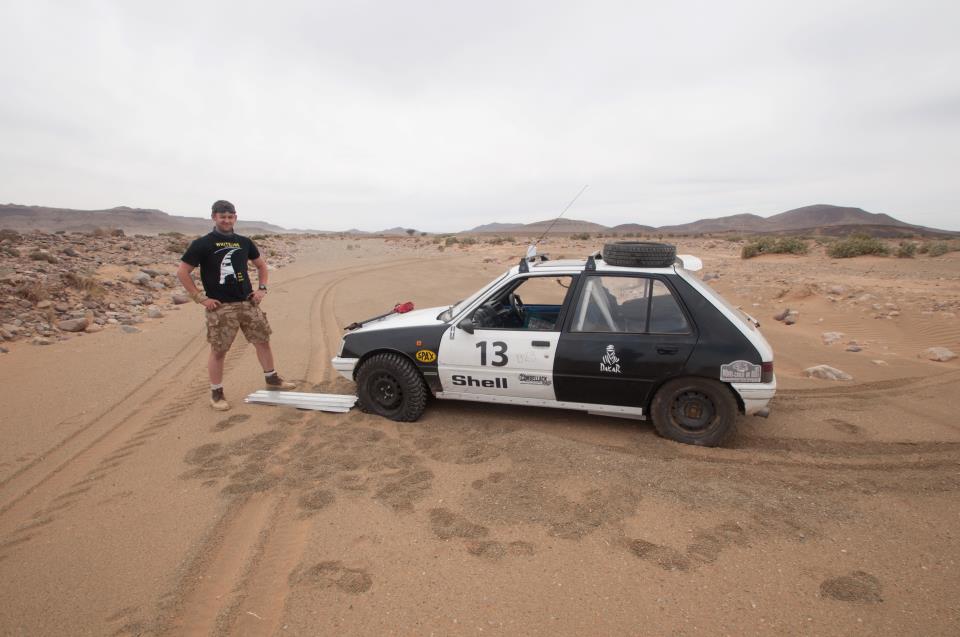 Year 2 saw the run split into 3 groups with a total of 88 cars, with Britcrap replacing Commiecrap cars with a fleet of Montegos, a Herald, Ford Corsair, and even a Wedgie Austin Princess and Triumph Acclaim. About 75 cars made the Gambia while 4 cars died en route.  What happened to the rest…we have no idea!  The first Trabant made the finishing line and was promptly ignored in the charity auction.

The originality of team names is always amazing from “Four Weldings and a Funnel” to “Ministry of Sand”.

A massive 176 vehicles this time. The logistics were creaking badly with border delays and bursting campsites.The international element grew with teams from everywhere from the US to Kaliningrad. As ever, the worlds greatest travellers and Good Samaritans, the Latvians came up trumps helping other teams. The run began to attract oddballs like Chris Denham from the West Country in an icecream van along side with that bloke with a Bolton accent from Top Gear who was into motorbikes. The old ways of cars without MOT and the smell of cannabis in the campsites started to retreat as the quality and the age of teams gradually increased. With respectability brings ordinariness but as the spirits sag, along comes a smoky LDV Sherpa laden with red diesel and life looks better!

The charity auctions raised almost £150,000 in 2005 with prices ranging from almost nothing for a Citroen BX and the lovely Citroen Arcadiene to £3,650 for a Pajero. It became clear that classics fetch little in a country where the car is a beast of burden. A separate run to Central Asia saw 17 teams braving the mad bad dictarorship of Turkmenistan.

Up to 204 vehicles this time. Prices at the charity auction a little lower as Gambia becomes saturated with motoring icons ranging from the Citroen CX (a snip at £295..the cheapest car this year) to the leather luxury of the Rover 800. Highest prices car…a Jeep at £2755. Total raised £138,000 at the charity auction with more by the teams themselves for their own chosen causes. 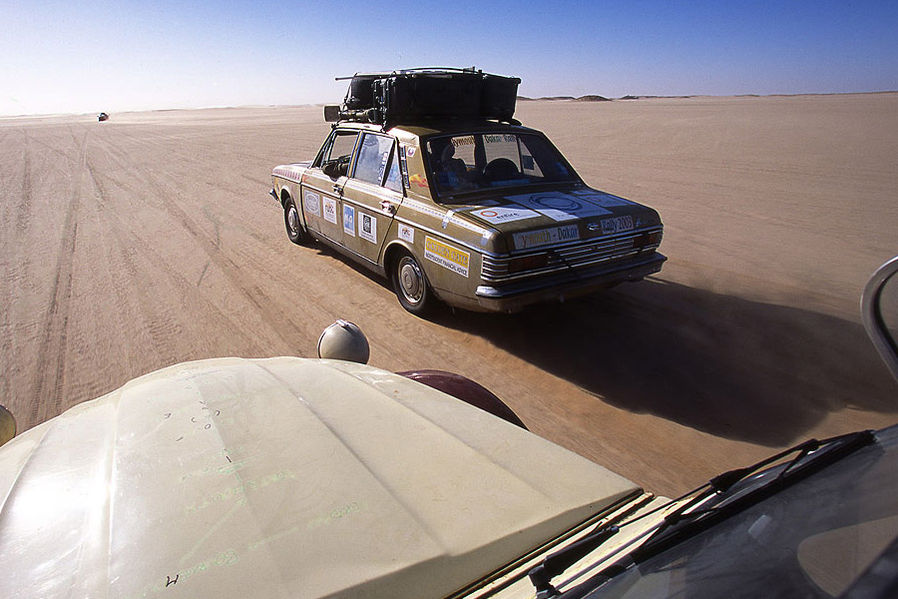 To relieve congestion and as Mali is unbelievably beautiful and friendly, the Bamako run is launched. Entries for Gambia totalled 190 and 27 brave souls started the first run to Bamako. Cars this year included more Trabants, a hearse, London taxis, and a Lincoln Town car limo.  Sadly the GMC school bus never made it beyond Dakhla and is still there to this day.  A new record high for a vehicle (Land Rover Disco at £4485) and a new low (£107 for a SAAB).  £109,000 raised in Gambia and £13,000 in Mali. This year saw the arrival of uber-organisor Sunny Akuopha who handled the Mali end via the Bamako Rotary club.  Bamako saw its first Icecream van which dispensed Mr Whippys on the finishing line before going on to Timbuctu. 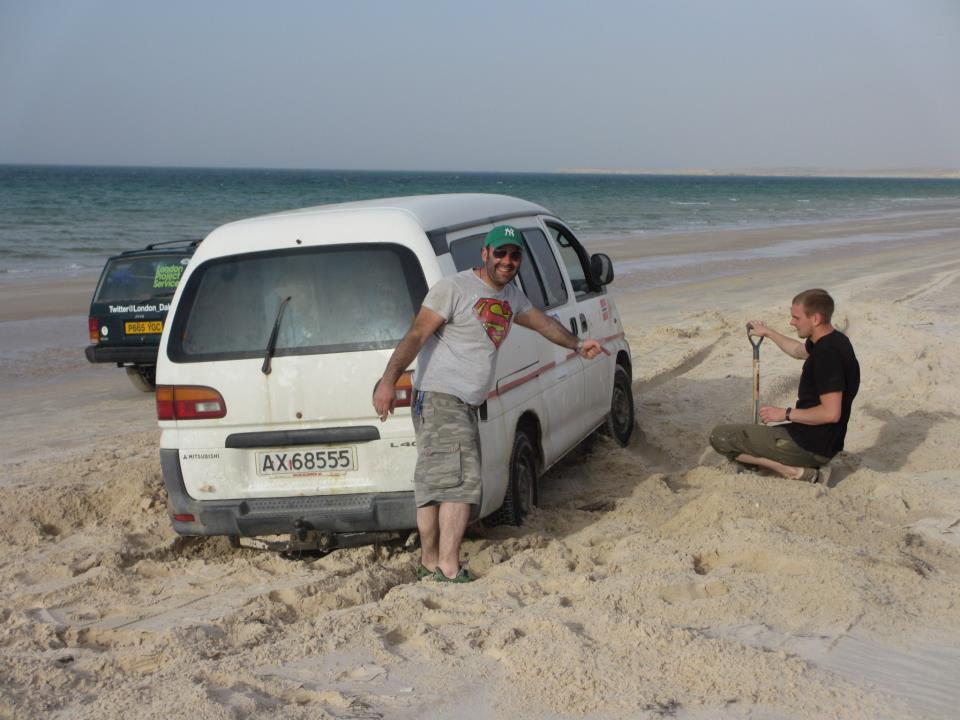 2008 about 100 cars to each finishing line. Fewer classics this year although there was a lovely round headlight Lada from Latvia. 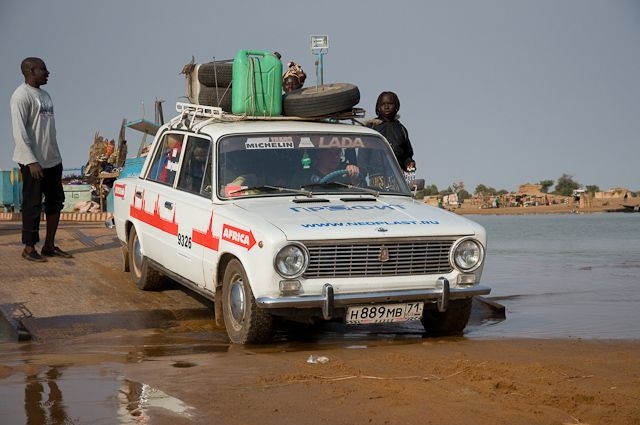 This year saw the launch of the Dakhla Challenge with a Roadbook penned by Sahara guru Chris Scott. Four French tourists (unrelated to the rally) were murdered on the road to 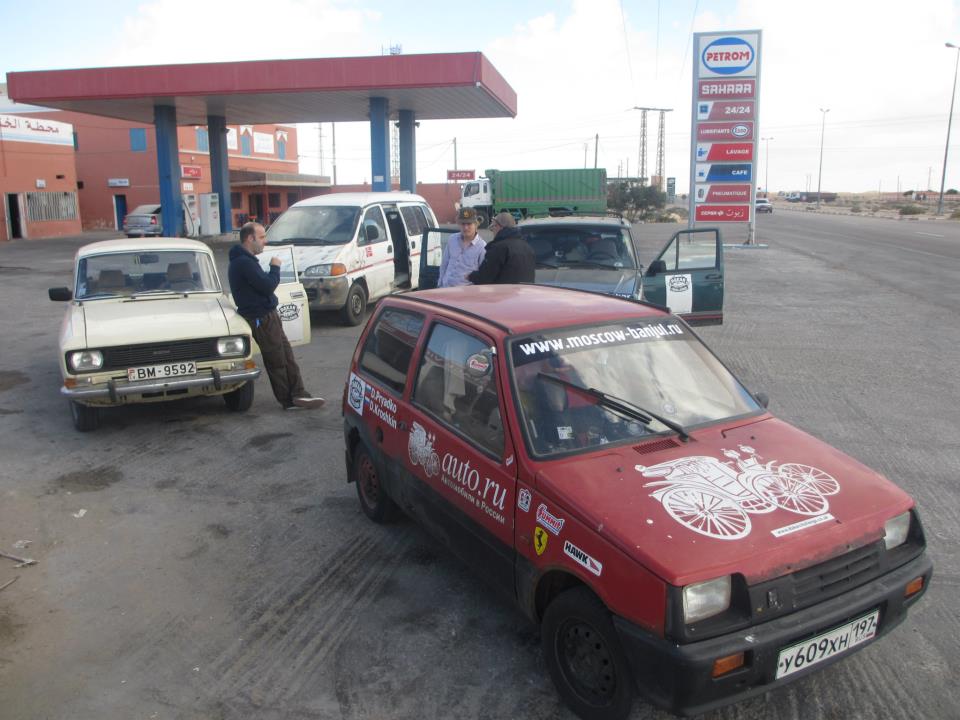 Mali but most teams pressed on and a small number took the chance to switch to travelling around Morocco.

The 2010 Challenge was called off after a heightened threat level in Mauritania. However 10 teams decided to do it anyway lead by the maverick Dr Neil Rushden from Devon.  All made it without any problems and while Ceri was tempted by an offer of marriage from a tall Mauritanian, she returned a single girl.  Easter saw another Dakhla Challenge probe rarely visited corners of Morocco and thanks to the stunning Chris Scott Roadbook, both 2WD and 4WD vehicles were well catered for.  The summer saw the launch of the first Murmansk challenge and a heady mix of Reindeer, the Midnight Sun and Russian Nuclear Submarines along with a Lithuanian Country & Western Festival ensured a high level of interest in the 2011 run. 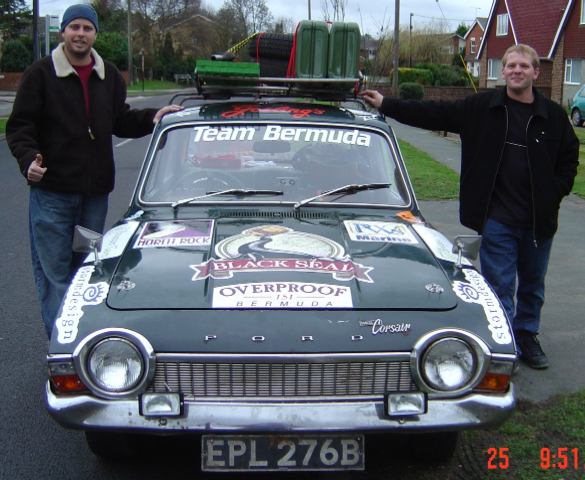 The runs to Mali and Gambia successfully completed in January as did the Morocco run around Easter. One team was arrested for spying on the Murmansk Challenge but released by the Russians.  Must remember not to take photos in a military zone!  We launched a free of charge run to Petra in Jordan and received a warm welcome in Syria from both government and opposition forces.  We were after all, the only tourists.  This year saw the re-launch of the website and a new logo but still featuring the much loved Lada Niva.

Another trouble free start to the year with teams making it to Mali and the Gambia. We can now source cars for teams from outside Europe on a not for profit basis so they can compete. 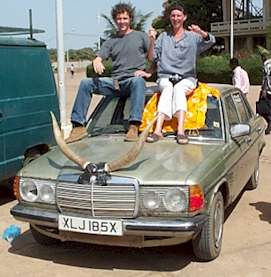 The 10th anniversary of the worlds longest running banger challenge and great timing as the French sent troops and aircraft to Mali to take out the Islamist rebels in January 2013 just as teams were due to arrive. However this bodes well for future peace in one of Africa’s most lovely spots.  I hope that we get a good number of teams in Dec 2013 when Mali may be safer than it has been for years, thanks to French help. The Dakhla challenge is proving popular as teams can now sell their vehicles to Mauritanians at the border before flying home. 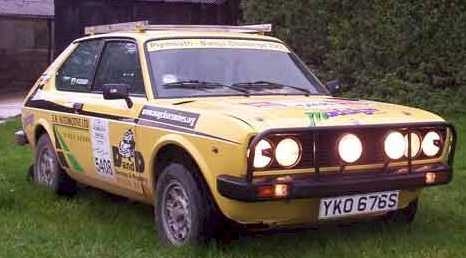 Another year of trouble free (relatively) passages to W Africa with the first Nouakchott Challenge being launched, now that Mauritania can accept rally cars which are sold for good causes. This runs at the same time as the runs to Banjul and Bamako.  Facebook page prospers with around 1500 likes.

New routes tested with Mauritania enjoying better security. Terjit oasis and Atar will be added to the runs for 2016 within a one week St Louis Challenge for those who want a full on African experience without the need to drive there. We offer you a car off the finishing line at Nouakchott for you to explore Mauritania with your journey ending in Dakar, Senegal, before flying home. It has taken us 12 years to reach Dakar and we have finally done it! 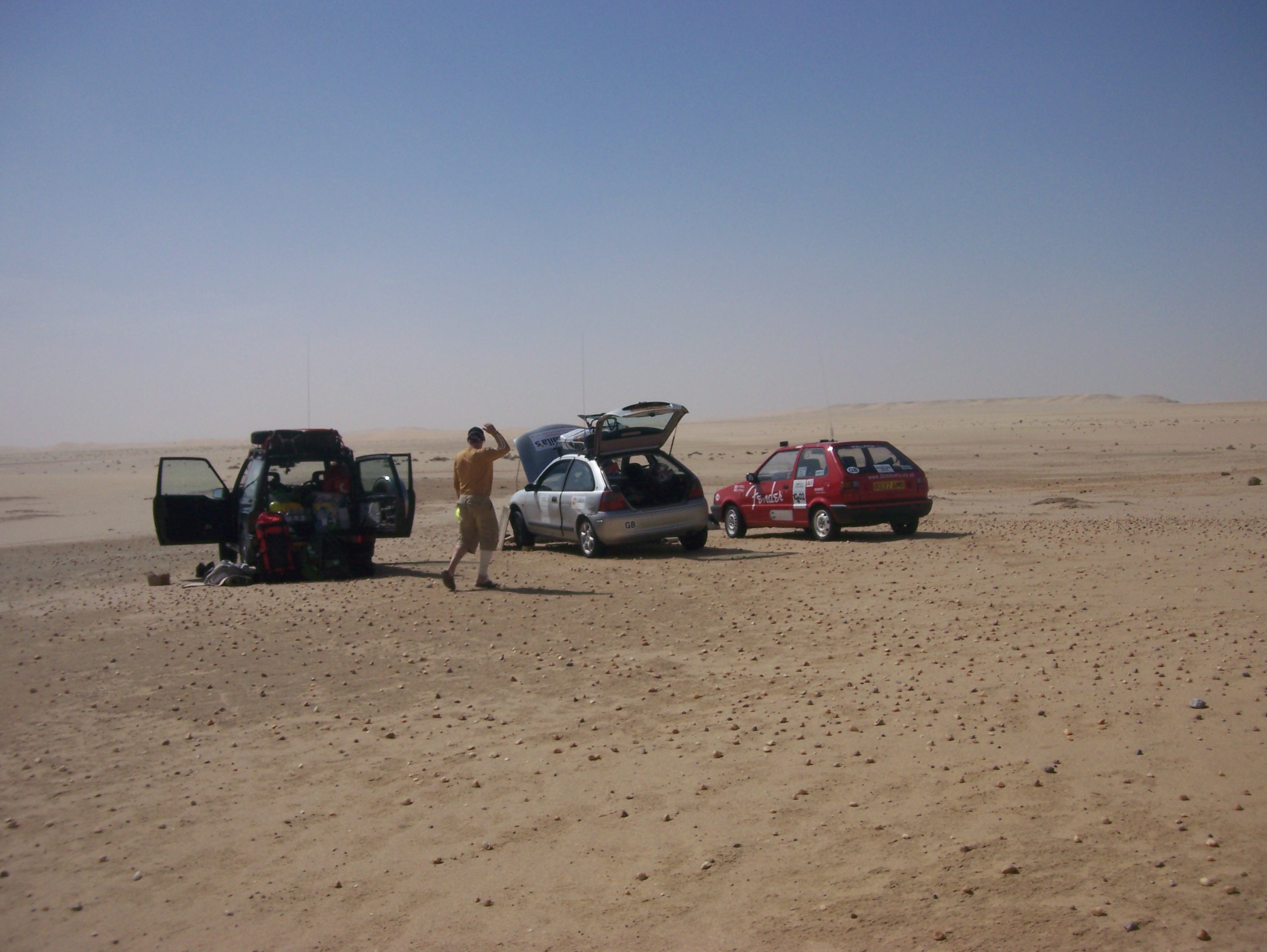 RHD cars permitted to Gambia for the first time. Runs to Chernobyl twice a year with a max of 14 travellers proving popular. 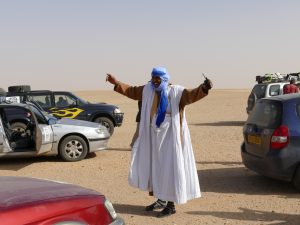 Hi i am Dave Clement and am now organising the rally. I am an old hand from the early years as well as running moped events in S E Asia.

You can apply to join one of our stunning challenges here.
Click here for the application form 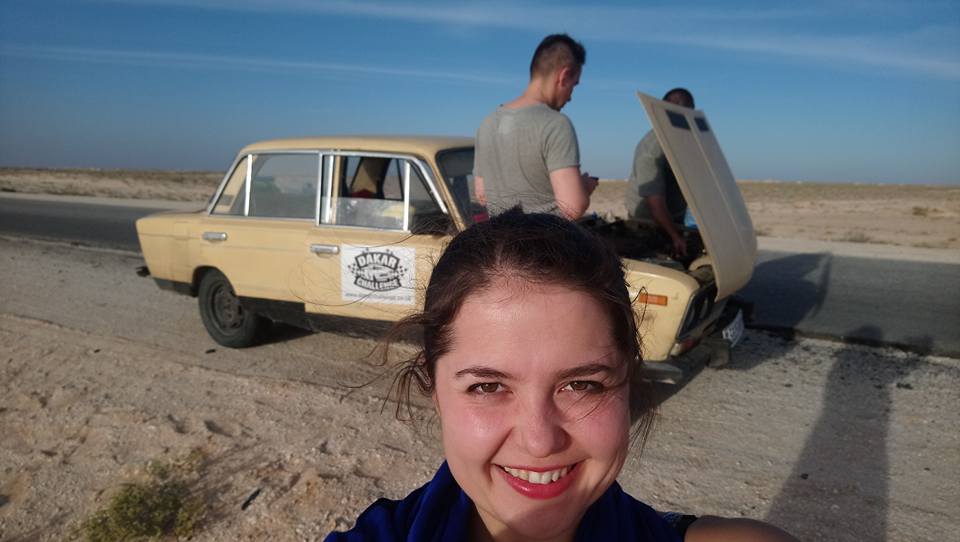 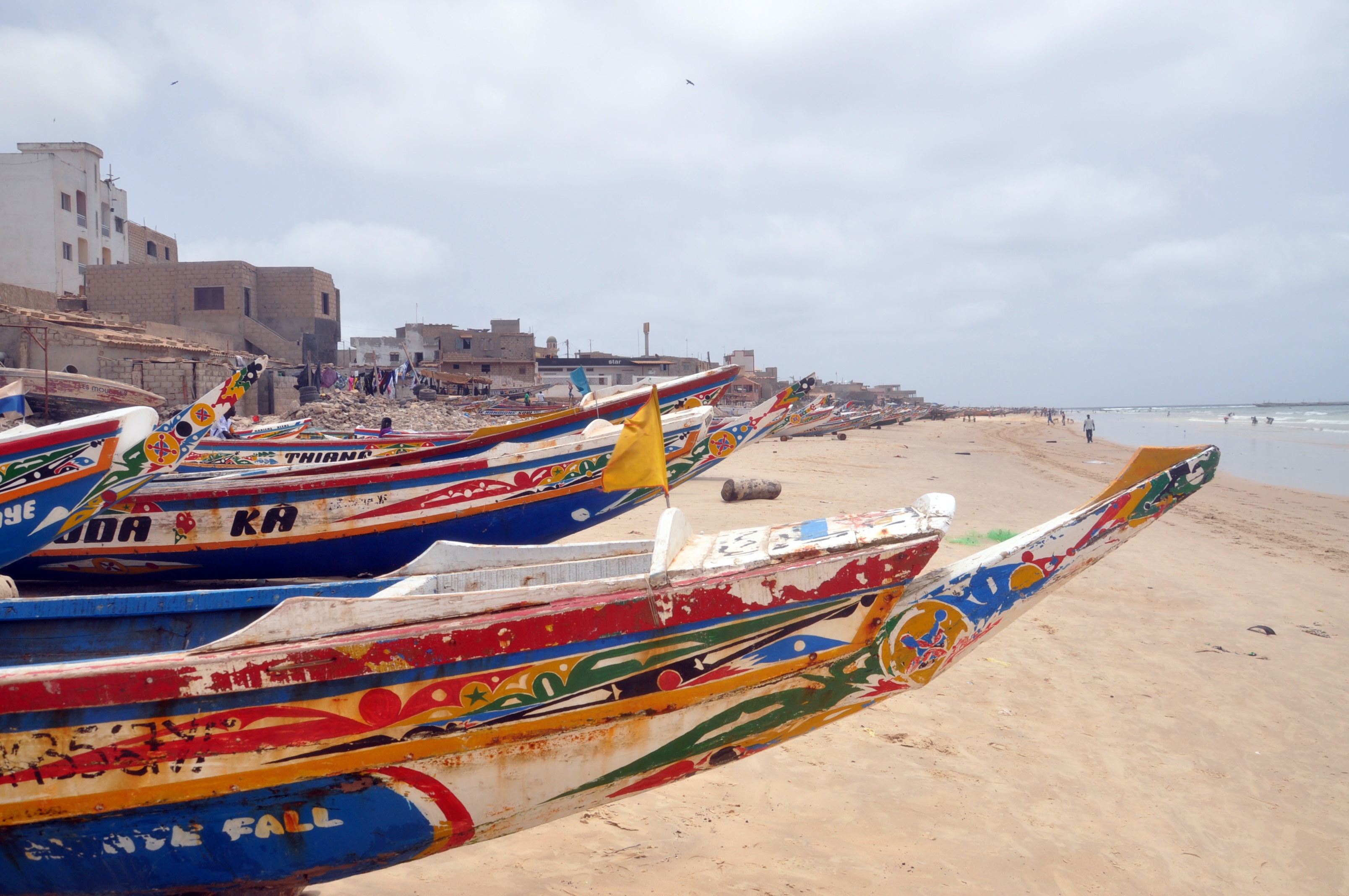 Video of the 2020 run to W Africa:thankfully without endless footage of cars driving!https://vimeo.com/441117535?fbclid=IwAR0FfRihOl2tR7d0Hd7BFfOFiNyj8voJ7U41eUCRd7nbyHKNsV2aGogKXbs

Video of our 2019 Chernobil trip

This website uses cookies to improve your experience while you navigate through the website. Out of these, the cookies that are categorized as necessary are stored on your browser as they are essential for the working of basic functionalities of the website. We also use third-party cookies that help us analyze and understand how you use this website. These cookies will be stored in your browser only with your consent. You also have the option to opt-out of these cookies. But opting out of some of these cookies may affect your browsing experience.
Necessary Always Enabled

Any cookies that may not be particularly necessary for the website to function and is used specifically to collect user personal data via analytics, ads, other embedded contents are termed as non-necessary cookies. It is mandatory to procure user consent prior to running these cookies on your website.